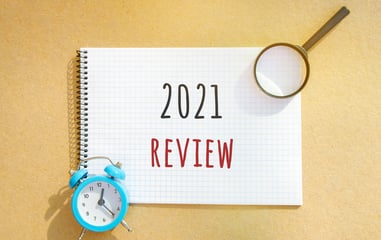 Everyone hoped that 2021 would be a reprieve from the insanity of 2020. But it wasn’t quite the recovery most of us thought it would be. However, the upside was that the Covid vaccine began rolling out and returning life to some form of normalcy. The downside was that many people wouldn’t take it. The result is a year with rollercoaster-shaped infection-rate graphs in most countries around the world.

In our world of helping to keep the nation’s water systems safe, the news is mostly positive. In fact, 2021 saw several breakthroughs that will positively impact our nation’s future. In this year in review roundup, we share the year’s water-safety related highlights.

In early 2021, we proudly introduced our new Large Enclosure Series (LES). The enclosures are much larger than the typical standard or custom size, expanding to widths, lengths and heights that are up to 25% beyond our competitor’s capabilities. This means that now even out-of-the-ordinary size installations can gain the safety of a right-sized cover.

Speaking of innovation, backflow preventers have now joined the “Internet of Things,” the leading edge of technology that connects “things” over the internet to extract vital data. This is important particularly in light of the new water conservation laws coming on board.

To help educate municipalities, engineers, contractors and technicians on the emerging trends in backflow preventer installation, here at Safe-T-Cover, we introduced our updated Best Practices in Backflow Prevention and Protection guide. It includes a wide range of topics all aimed at keeping our nation’s water systems safer.

On that same note, in June, we wrote about the issue of the most important considerations to include in the set of standard details for the installation of above-ground backflow preventer enclosures.

One of the highlights of 2021 for us was being able to return to the in-person trade show circuit from August to November. We were able to visit:

We’ll add a quick shoutout to the TIFFT Symposium in September, because it was the first of its kind in New York since 2019. Everyone was excited to be participating in an in-person event to celebrate the water industry. There were several informative and essential training sessions that deserve mention, including:

In September, we reported on some exciting news and important project in the works and on the horizon. One of these included the Gwinnett Country, Georgia’s Water Tower Project. We donated several enclosures to the three main test sites where municipalities will set up a water scale (hundreds of GPM) to test alternative filter systems and other systems. We’re excited for the launch of this innovative project sometime in late 2022.

Another bright light on the horizon for 2022 is the new U.S. infrastructure bill, which could impact backflow protector regulations. While many details of the bill are not available yet, what we do know is that $50 billion has been allocated to water infrastructure, and $55 billion has been allocated to funding for clean drinking water — with the goal of improving our nation’s water systems. This will include replacing lead pipes and service lines around the country.

We don’t exactly have a crystal ball, but, based on this year’s highlights, we strongly believe that 2022 is poised to bring us more good news with regards to keeping our water systems across the country safer and stronger for everyone.

How and Why The Cross Connection Control Industry is Changing

Why You Should Get Specific About Backflow Installation

7 Reasons Utility Vaults are a Bad Choice for Backflow Installation