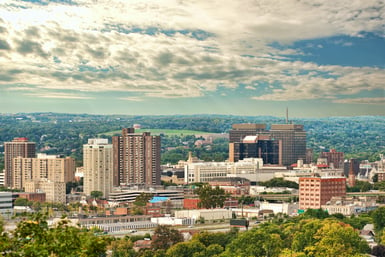 Recently, we attended a trade show in upstate New York called the NYSAWWA Tifft Water Supply Symposium. Like most trade shows, this was the first of its kind in New York since 2019 and everyone was excited to be participating in an in-person event to celebrate the water industry. Along with the municipality awards and the recognition of the host city of Syracuse (did you know the Erie Canal used to run through downtown?), there were several informative and essential training sessions that deserve some highlights.

Owasco Flats Restoration Project – over the past few years, the Owasco Flats region had lost much of its environmental impact because of flooding and land deterioration resulting from development and past ecological decisions. Surrounding land tracts were purchased by the Department of Environmental Conservation and used to return the Owasco Flats to its natural beauty and purpose. One great quote from Director Matthew Marco: “Will this project eliminate climate change in the finger lakes? No, but we can put our dent in it.”

With much of the political conversation centered around the infrastructure bill being bounced around in Congress, several training sessions concentrated on how a municipality could actually access those funds to update and repair its infrastructure. These sessions were very straightforward and useful in how to obtain and benefit from the public funds that everyone is talking about [Spoiler alert: Lots and lots of red tape, but worth the effort].

Water quality sessions are always the meat and potatoes of an AWWA show, and there were several interesting sessions concerning contaminants (PFOA and PFOS detection and treatment), alternative filtration techniques, and a really interesting update on the effects of climate change and the increase of harmful algal blooms. The recognition and elimination of HABs in water sources is a massive issue in water quality that will only get worse over time.

Of course, the highlight of the show was the technical session concerning Best Practices in Backflow Prevention and Protection.  We discussed national and local trends in backflow prevention, specifically the rapid transition to RPZs for greater protection of the water supply. We also discussed the dangers of confined spaces and the pitfalls of installing RPZs indoors.  Finally, we examined the concept of above-ground backflow and meter installation and the merits of ASSE 1060-approved heated enclosures.

The 2021 NYSAWWA Tifft Water Symposium was a great success and it was refreshing to attend the event with so many groups and individuals who share our passion for protecting the water supply.

An Uncomfortable Truth About the National Water Supply

Safe-T-Cover and Diversity, Equity and Inclusion

Podcast: Our Chat with Nate Peirce, from HR Prescott & Sons

How the Latest Infrastructure Bill Could Affect Backflow Protector Regulations

Safe-T-Cover in the Trade show Circuit