Posted by Christopher Mayhew on January 17, 2017
Find me on:
Facebook

Safe-T-Cover recently caught up with Chris Mayhew to discuss his experience with backflow devices installed in utility vaults. He has many years of experience climbing into vaults and testing backflow devices. We appreciate his insight and contribution to this topic. Here's what he had to say:

I've worked for years now on backflow preventers in Virginia both as an independent contractor and through my business, Backflow Services, Inc. I also spend a good deal of time in the classroom teaching both a 40 hour backflow tester certification course as well as an 8 hour installation course. You may call me a backflow whisperer and could fairly say I've just about seen it all in the field. I've worked on backflow devices in vaults, enclosures, and mechanical rooms. These installation options all have their positives and negatives. The one that has, for a long time, been the most popular solution is the below ground vault. 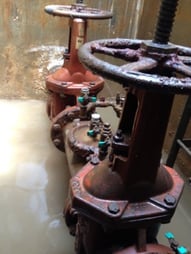 Having tested many backflow preventers in subterranean vaults, I can say that they have pretty much all flooded at some point. This may not be the case in different climates, but this has been my experience in central Virginia. Except for brand new installations, 100% of vaults I've worked on have flooded at least once. In a lot of cases they need to be pumped out before I can get in them. Sometimes the backflows are covered in scum and mud. This means that the backflow device and usually the test cocks have been submerged. I'm comfortable with standing in a vault with water up to my knees as long as I have rubber boots on, but a submerged backflow preventer means trouble. In fact, sometimes the device is completely buried in mud. I know as a tester that when the test cocks are submerged, even if they are in the closed position, that a cross connection can occur. I am not alone in this position, as the USC Foundation for Cross Connection Control and Hydraulic Research has written about this problem twice. You can read the first article published in Spring of 2005, and the second article published in Spring of 2014. Submerged test cocks are a violation of EPA regulations, which states that water purveyors shall not have cross connections. For more proof of how common vaults flood, watch the video below of footage from fellow testers.

The simplest answer to that question, at least in Virginia, is for freeze protection. Even though an ASSE 1060 Class 1 aboveground enclosure provides adequate freeze protection for the backflow device, they are not yet popular in the region and require a heater, so most devices are installed inside or below ground. Architects and design engineers would prefer to keep backflows out of the building. This is partly because indoor backflow preventers can take up so much space. Most of the vaults in the area house double check backflow preventers for fire lines. These are large devices that need to function year round. Even when it's 2 degrees outside, like it has been in the mornings recently, it's warm enough in a subterranean utility vault to keep the backflow device from freezing.

Underground vaults for backflow preventers are considered a confined 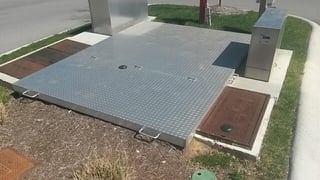 space. This means that the space is large enough for someone to work in, but too small for continuous work, and has limited or restricted means of entry. You can read more on OSHA standard 1910.146 by clicking the link. So vaults are confined spaces, however, it is up to the local government to determine if they are permit-required confined spaces. None of the jurisdictions I work in consider water utility vaults to be permit required confined spaces. This is why there is not signage regarding these utility vaults. Unless it is permit-required, it does not need confined space signage. Even so, I still make sure I never open or enter a vault on my own. I always request either a representative from the property or the water jurisdiction is present before I even open a vault to work on it. I wait for my safety, not because I have to. Time, contractors, and property owners can wear on the hex-head security mechanisms and most are broken within a few years of installation. That means just about any curious person could get in if they really wanted to. 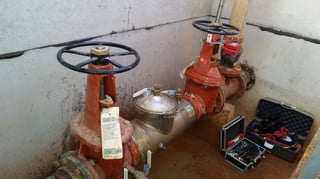 vaults may not be the safest solution for our drinking water. The fact that they flood so often and so easily is a major concern because of the cross connection that can occur through the test cocks. Those with great influence over the industry, such as the USC FCCCHR, appear to be in agreement on this subject. However, architects, engineers, and contractors are not plugged in to this information. Backflow prevention is such a small piece of an engineer's work on a building that it is often overlooked. There is no specific course on backflow prevention for those designing and installing these systems. You would think that the water jurisdictions would have a backflow prevention team and budget big enough to practically guarantee the safety of our drinking water. That's not the case. In one district I work in, there are over 40,000 devices, but only two people in the office to oversee them. This is not a glamorous topic, but there needs to be more education and light on backflow. If there was, there would likely not have been multiple backflow events in 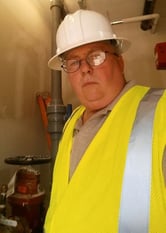 Corpus Christi in the last couple years. The push in many areas, including Virginia, to use RPZs on all lines will change some of these practices. That comes with it's own problems and concerns, which is for another day.

About Chris Mayhew - In the mid 2000s, Chris Mayhew was working as a contractor in Virginia doing utility work often on irrigation and landscaping. He eventually began to regularly work on both residential and commercial irrigation backflow preventers. It was about this time that many of the jurisdictions in Virginia began enforcing annual testing. In 2011, Mr. Mayhew decided it was time to get certified as a tester and it led him to eventually begin a new business, Backflow Services, Inc. in 2014. Since then, he has also gotten certified as an instructor and is now a well-known voice in the field and classroom in the Mid-Atlantic. We at Safe-T-Cover appreciate his work in the industry and his contribution to our website.