Most backflow preventers are installed in a utility vault rather than in an industrial enclosure. Do you know all the risks associated with that choice?

As a water utility or civil design engineer, backflow design and installation must be a consideration on each new commercial or industrial project. 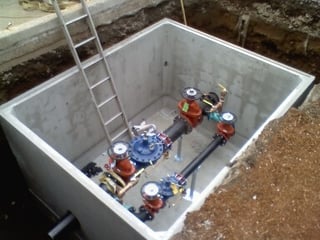 However, most of us tend to do what we’ve always done and typically don’t challenge the status quo. This is the likely reason why, more often than not, the backflow preventer assembly is installed in a utility vault and not in an aboveground location. It takes risk and courage to challenge what has always been done but there are a handful of arguments that make the case to place the backflow assembly above ground in industrial enclosures. In order to fully understand the differences between these choices, you must consider them throughout their lifecycle. We'll cover all the costs associated with underground utility vaults from start to finish.

Utility contractors and water works distributors will tell you there is no real initial cost difference between the backflow assembly getting installed in a vault or in an above ground enclosure. If you were to simply compare the vault vs the backflow enclosure for different sizes and models, you would see the enclosure itself does often cost less. Each side has an additional consideration though. First of all there is more labor related to the excavation for a backflow vault, especially when rock is involved. It only takes two men and a couple of tools to install most industrial enclosures. On the other hand, there’s also the additional cost associated with plumbing the backflow assembly above ground. With those two obstacles in mind, the utility vault costs slightly more than the backflow enclosure and the customer won’t see any noticeable difference in the overall project cost. Watch the video below to see proof of flooded vaults sent to Safe-T-Cover by testers in the field.

Most of us would agree that a backflow assembly routinely subjected to standing water in the vault is not desirable. Ask your water utility or backflow tester how often they encounter a flooded vault and you may be surprised. It's much more common than most people think. Water utilities and backflow testers all over the country often tell us as many as half on the utility vaults have standing water in them. This water is runoff, doesn't come from the pipes, and is definitely not clean water and often results in mud collecting on the backflow preventer assembly itself. The grit in the partially flooded vault and on the assembly could reduce the life expectancy of a backflow preventer. Periodic maintenance of relief valves, test cocks, and internal checks certainly is more labor in a vault than an above ground enclosure.  We all know how much these things cost. A backflow assembly installed in a dry, above ground enclosure can easily save a few thousand dollars since it won't have to be replaced for many more years. In this case, your customer ends up paying more over the long haul when installed in a utility vault. 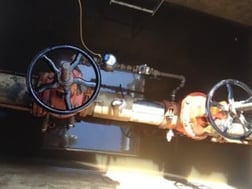 Did you know that when the device is underwater in a flooded vault, backflow can occur? Why spend thousands of dollars on a device only to install it in a location where it can’t do it’s intended purpose? As a water utility, you have the responsibility to provide clean drinking water. This ongoing practice deserves reconsideration. As a civil engineer, are you taking on unnecessary risk when a backflow incident from a flooded vault causes illness or even death? This is not our opinion. Instead, one of the  most respected authorities on cross connection control - the USC Foundation for Cross Connection Control and Hydraulic Research has published articles urging water jurisdictions and designers to discontinue the practice of placing backflow preventers in utility vaults. "When a backflow preventer is installed below grade, the vault or pit in which an assembly is installed may fill up with water. The water in the pit could create a cross-connection between the water in the pit and the backflow preventer through the test cocks. This may occur whether the test cocks are opened or closed.” There is an additional concern here as well. As the civil engineer specifying utility vaults, be sure you are current on OSHA confined space requirements. The proper OSHA requirments should be specified in the design and verified during construction. Does your recent project have the proper signage?  If not, have you taken irrational risk? We rarely see a vault with the required confined space signs in place.

The status quo guides many decisions in our work and personal life. But doing so when said status quo is outdated and dangerous can often put us in a compromised position. Where will you locate your next backflow assembly? By placing it in the utility vault you’ve maintained the status quo even though the reasons against it are significant. If you are the water utility, continuing to allow the backflow vault installation means you acknowledge a flooded assembly creates a possible cross connection. We believe these risks are irrational.We'd like to hear your comments.