7 Reasons Utility Vaults are a Bad Choice for Backflow Installation

Across the United States, it is common to find a backflow preventer, whether for a fire or domestic line, in a below ground vault. However, there are a myriad of reasons to join a growing  consensus of people that have pulled the plug and drained the pit. Living with this perpetual hazard to life, limb, and water safety just doesn’t make sense.  If you find yourself clinging to this old-school favorite, nostalgia won’t bail you out.  Here are seven reasons to climb that ladder one last time, and use backflow covers instead.

First and foremost, reduced pressure zone assemblies (RPZs) can never be installed below grade. Every manufacturer of USC and ASSE-approved RPZs in the U.S. prohibits installation of this assembly below ground. If you want to keep your RPZ backflow preventers outside, vaults are out of the question. They can either go unprotected, or inside an industrial enclosure.

What about double check valve assemblies (DCs)? Why not continue to install DCs in vaults? I’ve got six more reasons. 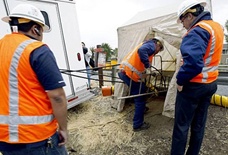 maintenance tasks. By now, we are familiar with fresh air exchange hoses, tents, and extra men. As of August 2015, a new permit system is now in place for entry into hazardous or potentially hazardous spaces and most water vaults are included. The permit requires several administrative items to be named or declared including names of entrant, assistant, and supervisor, the purpose of the entry, the time required for entry, the work done, the emergency services standing by in the event of an emergency, and so on. These days, there is no way to open one of these things with less than a 4-figure expenditure. There are no OSHA permits required to open an aluminum backflow cover..

In addition to confined space hazards making the vault approach financially constraining, there is also a very real risk of serious injury.  OSHA claims that there are 4.8 million entries with over 11,000 injuries each year. According to data collected by the U.S. Department of Labor, fatal injuries in confined spaces average 92 per year. There is very little risk of injury when it comes to aboveground enclosures, and they are not considered a confined space by OSHA.

Beyond the cost of protecting on site workers, there are even more significant problems with the use of vaults. According to the USC Foundation of Cross Connection Control & Hydraulic Research (USC), flooded vaults violate the International Plumbing Code. When a vault floods, the mandatory test cocks are submerged. The water may look clean, but consider what would typically make up the contents of that water. Run-off of lawn chemicals alone makes this a clear and present danger to the water supply.  In fact, it led USC in 2005 to change their recommendation of DC installations stating, “The foundation’s recommendation is to install the double check valve above grade.” Nine years later, USC continued to express this position with even more specificity in 2014: ”When a backflow preventer is installed below grade, the vault or pit in which an assembly is installed may fill up with water. The water in the pit could create a cross-connection between the water in the pit and the backflow preventer through the test cocks. This may occur whether the test cocks are opened or closed...."

The language from the USC FCCCHR states that vaults may fill up with water. You may be surprised at how often they do fill up with water. Watch the video below to see a compilation of photos and videos sent in to Safe-T-Cover by testers in the field.

Until recently, double check detector assemblies for large fire systems were commonly placed in vaults or inside the building. However, more and more fire departments across the country are demanding that fire line resources, such as backflow preventers, be available to firefighters as far away from the fire as possible. What's even more interesting, is that some of the coldest cities like Chicago, Buffalo, and Rochester are requiring that they be installed in a backflow preventer enclosure. Entering a building or a vault is an additional hazard that can and should be avoided. Aboveground fire line backflow preventers with accompanying Fire Department Connections (FDCs) move all the water resources where access and safety are maximized. Chicago, IL, Flower Mound, TX, Lynchburg, VA, and Charlotte, NC are just a few of the many cities that now require outdoor aboveground fire line backflow installation to improve firefighter safety.

Water hazard level standards are changing. This typically happens in two ways. Buildings, through their normal life of changing tenants over time, often change to higher hazard water uses. A flower shop becomes an urgent care facility; a shipping warehouse becomes a paint shop. In these cases, a DC in a vault would have worked initially, but now the higher hazard water use calls for an RPZ in an industrial enclosure. Cities and counties are also changing what they classify as high

hazard. Take this recent example involving a Nashville property. When an automotive dealer bought this property and erected the building, they put a DC in the vault with the meter.  This was consistent with the then-current guidelines. A few years later, the city changed an ordinance that redefined this business's use to high hazard. The automotive dealer did not change what they were doing, but the city decided that what they were doing was high hazard after all. The city eventually forced them to change to an RPZ. After constructing this huge vault, they now leave it almost empty with an RPZ in a backflow cover on top. They easily paid three times for a single solution simply because they began with a vault. These retrofits are becoming more common and you can learn more about hazard standards, DCs, and RPZs here.

In these litigious times it is worthwhile to think about what the legal community has to say about best practices for containment backflow preventer assembly placement.  Until his death three years ago, Attorney Doug Cregor, specialized in cross-connection control litigation and advocacy and was a recognized leader in this area of the law.

“An outdoor, aboveground BPA installation may be the best way to 1) reduce the owner’s exposure to damage caused by flooding and the corresponding water contamination caused by a cross-connection; and 2) reduce the legal liability of the design engineers, the installers, and the certified testers whose professional actions, in part, may have otherwise caused the flooding harm. The water industry has a nationally accepted design criterion in ASSE’s Standard-1060 to protect these installations. It’s a win-win-win ‘insurance policy’.”

As Cregor mentioned in the above quote, there is a guiding specification to ensure quality and safety in the application of aboveground backflow installation for water systems, and it should be seen as today’s remedy for the vault. ASSE standard 1060 was created in 1996 and amended in 2006 in order to create uniform safety and quality guidance for industrial enclosure manufacturers. In fact, IPC code: 608.14.1 states, “Outdoor enclosures for backflow prevention devices shall comply with ASSE-1060”. It specifies minimum standards for heat, security, strength, drainage, and accessibility and cities that have added guidance for these installations commonly cite this standard as essential.

Stay Up to Date

If you are uncomfortable with the idea that the vault’s days are numbered, remember that there was a day when the last wagon wheel rolled off the assembly line. Let’s not wait until a sickness or death in one of our great cities or towns leads back to a contaminated vault. Consider designing water systems with the backflow prevention devices outside and above ground. As you can see on page five in this catalog from Zurn, a backflow preventer manufacturer, choosing to install them this way is normal if not expected.