Use an RPZ Backflow Preventer For Irrigation 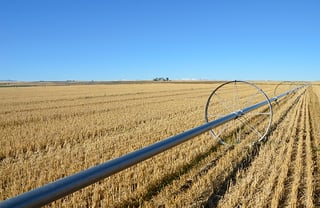 The type of irrigation backflow prevention recommended or required at possible cross connections is determined by the hazard level. Low hazards are called pollutants and do not pose a health hazard, while high hazards are considered contaminants and would pose a health hazard. The most commonly specified backflow devices are double-check backflow valves and reduced pressure zone devices. We've written an in depth post explaining the differences between DC and RPZ valves. There are other devices and assemblies available to prevent backflow depending on the situation and whether there is a risk of back-siphonage or back-pressure backflow occurring. Refer to this introductory post on hazards for more information about how hazard levels are generally determined. Armed with a 40,000-foot view of potential cross connections and how your water system works to prevent them, let's get in deeper and zero in on just one water line use: irrigation.

Even though some water municipalities allow double-check backflow prevention devices on certain irrigation lines, the American WaterWorks Association (AWWA) recommends irrigation lines be classified as high-hazard. According to the AWWA Cross Connection Control Manual, many irrigation systems are constructed with materials that are not suitable for use with potable water. Additionally, it's common knowledge that these systems can come into contact with fertilizer, pesticides and even feces. Some systems may use chemicals or fertilizers in the line itself. So we know there are elements which would pose a health hazard if there were to be a cross-connection. Unfortunately, irrigation cross-connections are very possible. It's common for equipment in the system to become and remain submerged after use or during storms. Both back-siphonage and back-pressure are concerns for irrigation systems. According to a 1999 study conducted by the American Backflow Prevention Association, 42% of 135 cross connection surveys conducted resulted in finding a cross-connection. Many of the respondents found more than one cross-connection for a total of 233 backflow incidents. Of those, 62% identified an irrigation backflow incident, and another 43% identified a garden hose incident. Read more details about these findings in this EPA paper. 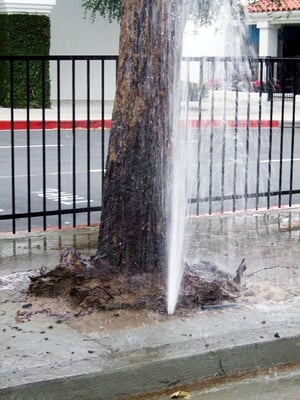 Unfortunately, the simple answer here is "yes." Below are incidents which have been documented by the AWWA in its 2015 manual, or by other leaders in the industry.

There are many resources available which can help water systems and engineers design irrigation backflow systems with the most protection. The USC FCCCHR has a manual for sale on its website which is intended to "help those involved in cross-connection control in their efforts." The manual covers a range of topics from hydraulics to standards for backflow prevention assemblies, but also provides guidance on site surveys and the day-to-day duties of a cross-connection control manager. The AWWA also sells a cross connection control manual, most recently published in 2015. It outlines actual and potential cross connections, discusses the different devices available for protection, and gives specific recommendations for lines and buildings regarding hazard levels. The AWWA 2015 manual lists landscape irrigation systems as high hazard. The recommended protection states, "Irrigation systems connected to the public water system should be considered a high hazard, and the appropriate protection is an air-gap separation or a reduced-pressure principle backflow prevention assembly." However, since the EPA allows each water district to have their own standards for determining hazards, they may follow one of the above mentioned recommendations to a tee, or they may have developed more or less strict rules for their system. These rules are sometimes difficult to find. They are often located online in the municipal code, standard details, or the cross-connection control section of a website as is the case with Nashville, TN.