That’s why Safe-T-Cover strongly recommends engineers and municipalities “Think Outside the Vault.”

Why Backflow Preventers Are So Important

Backflow preventers are critical to protecting our water supply. They keep contaminated water from coming in contact with drinking water. When this happens, it’s called a cross-connection. 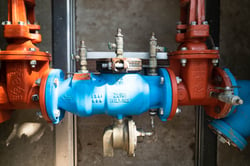 Approved backflow prevention assemblies are required by law in many countries. They must be installed in accordance with plumbing or building codes. A typical backflow assembly has test cocks and shut-off valves and must be tested when installed, if it’s relocated or repaired, and also on a periodic basis.

What Makes Utility Vaults So Dangerous

Backflow preventers were originally installed in utility vaults because people used to think it was the safest place for them — protected from the weather and from vandals. We now know this is not the case.

Utility vaults are dangerous for a number of reasons — the most important being that they put lives at risk on a daily basis. OSHA considers utility vaults confined spaces and say the risks include:

This leads to many deaths and injuries each year. 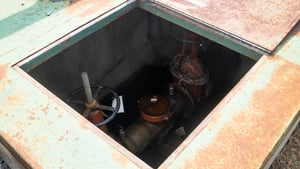 “I've heard a hundred stories across the country of people jumping down into a vault and immediately dropping dead. And if they have somebody with them, they jump down there to help them and they die immediately,” says Cary Wiley, National Sales Manager at Safe-T-Cover.

“Odorless gases can naturally build up in a vault, so you go in there thinking everything is OK, and all of a sudden, you have a colleague passed out in this vault,” says to Safe-T-Cover Vice President Chris Nickoloff.

It’s not just the presence of noxious gases that can be a threat. These deaths can be caused by oxygen deficiency, combustible dust and even radiation.

In addition to the deaths, confined spaces are said to cause nearly 11,000 injuries each year — many of them serious. According to OSHA statistics, they include:

There are also dangerous animals and bugs that backflow preventer test personnel may encounter in a utility vault.

Another major concern is many utility vaults flood. This significantly increases the risk of a cross-connection. “All that stagnant, dirty, muddy, horrible water can get sucked through the test cocks of the backflow preventer and into your 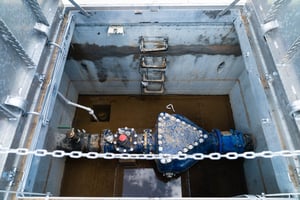 Nickoloff adds, “You've got this valve that is protecting bad water from mixing with good water. And when these vaults are flooded, the bad water can get into the good water, which goes into your home, and could cause you to get sick.”

In short, when things go wrong in a vault, they can go horribly wrong. This is why more and more water jurisdictions are opting to install backflow preventers above ground in a backflow enclosure.

Safe-T-Cover is asking designers and engineers across the country to “Think Outside The Vault.”  We now know that above-ground backflow enclosures offer the safest and most cost-effective way to protect your equipment.

Installing backflow preventers and meters in utility vaults is an unnecessary liability for water jurisdictions, so we’re encouraging a bigger push to install them above ground in a backflow enclosure. It’s much safer and more cost-effective.

Stop putting your employees and the community at risk.  Watch our video and download our free infographic that compares the benefits of installing your backflow preventer in an above-ground enclosure versus a utility vault.