One of the biggest concerns we hear from people who are considering a backflow enclosure is “What is it going to do to the aesthetics of my building?” It’s a great question, but not the one that building owners, designers and engineers should be asking. The real question is, “Where’s the best place to install my backflow preventer?”

People often keep their backflow installation in a vault or inside the building because it is hidden. This practice is not only unsafe, but it’s also not cost-effective. The safest place to install a backflow preventer or water meter is outside and above ground. And the most logical place to put it is off to the side.  The most important safety concern is water quality. An aboveground backflow installation allows for an RPZ backflow — the highest level of protection against back siphonage and backpressure backflow.

So, why isn’t this standard operating procedure? Typically it’s because no one asks the question. In this blog, we are going to talk about the location of your backflow enclosure and how it should not only affect your aesthetics — it may even improve them.

Where NOT To Put Your Backflow Enclosure

We know that because property values are so high, developers and designers try to maximize the building’s square footage. As a result, there isn’t often a lot of unused site space left for utilities. After the parking layout, entrance and exit roads are designed, site designers are usually only left with small islands of dirt to place water connection structures.

the building when you’re planning to install an above-ground, outdoor backflow enclosure to house your equipment. This can cause several problems, including:

This is why designers should avoid putting backflow enclosures upfront. Think about it this way: Have you ever seen a garbage dumpster placed in the front of a building? No. Because the designer thought about where it should go, put it behind the building (or off to the side) and housed it in an enclosure so few people have to see it.

By putting the same kind of thought into the location of your backflow enclosure you eliminate the aesthetic problem.  Here’s an example.

Put Thought Into The Location of Your Backflow Enclosure

With some thought during the planning process, the enclosure can be placed in an out-of-site location. Take a look at this image: 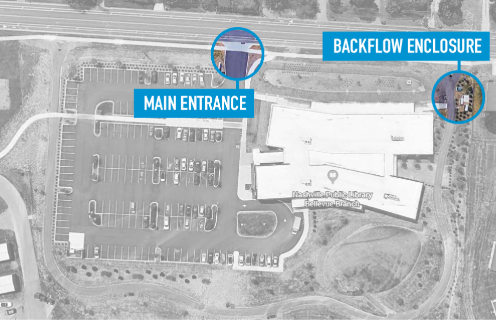 This is the Bellevue Branch of the Nashville Public Library System. You can see the front of the building. The parking lot is full of cars and the main entrance is off the street.

But if you look behind the building you’ll see the backflow enclosure (and most of the utilities) were located out of sight. This may have required a little extra piping, but for minimal cost, the aesthetics of the building are not affected. And it does not create a sightline problem.

Why This Location Works Best

This is a great example of the safest placement for backflow prevention assemblies. It’s outside the building in a heated backflow enclosure, which not only offers freeze protection, but it also ensures these three things:

But this isn’t the only option. For properties that won’t allow a “hidden” placement of the enclosure, the use of color and landscaping can serve as an effective disguise. You can see some examples by downloading our “Aesthetics Guide.”