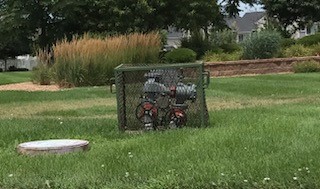 In Colorado, scenes like this are relatively common. Most jurisdictions allow the backflow preventers on irrigation systems to be protected by cages. You'll see smaller sized cages throughout residential areas, and larger ones installed in parks. Since most of the backflow preventers are removed each winter when the irrigation system is “winterized”, this common practice is deemed acceptable. The water jurisdictions use the lower cost cages to protect the valves since protection is only needed during the warm weather months. But is the cage really cost effective? How much does it cost a municipality (your tax dollars) to remove and reinstall the cage and the backflow preventer each year? How many man-hours, trucks, and tools does it take to remove and reinstall hundreds of cages and valves each year? And what about snap freezes in Colorado? All of the backflow preventers can easily freeze and become inoperable when cold weather abruptly occurs. Then you have the enormous expense of replacing all of the frozen valves. 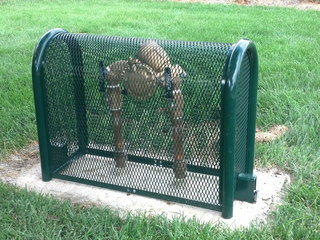 The popularity of cages increased after the economic collapse of 2008. With joblessness and homelessness at all-time highs, people were desperate to make income any way possible. Metal theft became a massive problem. Since metals had a high recycle value, the practice of stealing bronze, stainless steel and cast-iron valves and backflow preventers and selling them at the local metal yard was prevalent. The knee jerk reaction for many water jurisdictions was to simply bolt a cage over the top of the valves to “protect” them from theft.  As the theft problem got worse and worse, the practice of installing cages became the habit.  The problem, however, is that cages do not really deter theft, they simply delay theft. Putting a cage over valuable metals simply alerts thieves to which valves are most valuable. Does the sight of all this copper and bronze keep a thief from stealing this valve? On the contrary, it simply gives the thief a target and makes him work a little bit harder.

Another common area for cage installation is in warm weather climates along the “sun belt”. Florida, Texas, Arizona, and Southern California have a high density of cage installations because water jurisdictions do not fear the possibility of freezing. Since the valves “never” freeze, cages are adequate protection throughout the year. The problem with this theory is that warm weather climates do occasionally have freezing conditions.

2010 - Florida had a major freeze which damaged many backflow preventers and pressure vacuum breakers, most of which had to be completely replaced.

2011 - El Paso, TX experienced a major freeze event, which resulted in wide-spread replacement of valves in the City of El Paso, as well as over 1200 backflow preventers replaced on the base at Ft. Bliss.

2012 - Florida temperatures reached 21 degrees or lower and also caused major valve damage, most of which had to be replaced at the owner’s expense. 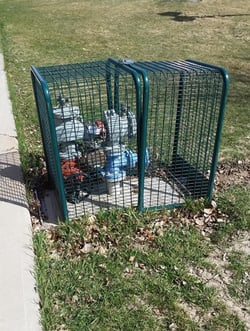 2015 - Arizona experienced a hard freeze event which resulted in frozen and damaged backflow preventers that had to be replaced at the owner’s expense.

Never underestimate Mother Nature. Just when you think your warm weather climate and open mesh cages will protect your valves and backflow preventers, she’ll storm in with some sub-freezing temperatures and the taxpayers have to replace hundreds and hundreds of frozen valves.

How Can You Know Whether A Cage Will Be Enough?

You just can't. Choosing between a backflow cage or enclosure requires you to weigh the possible risks and decide for yourself. Here are the facts. There are many companies that make cages for backflow preventers and other equipment. They come in a variety of sizes, and you do have the option of ordering a custom size. Backflow cages have no insulation at all to provide frost or freeze protection, but do provide some vandal, accident and thief protection as they are powder coated steel and do include a locking mechanism. Cages were advertised as the cheapest most dependable solution to theft. Unfortunately, they are often only protected with a cheap lock and since the thief can actually see what they are looking for, are less likely to deter theft than a solid enclosure. Cages used to be a less expensive alternative, but are now about the same price as an aluminum enclosure. They are useful in warm environments that do not have below freezing temperatures, but there is always a chance that the weather will do something unexpected as outlined above. It's up to you to choose the level of protection your equipment needs.

Standing out by blending in: Safe-T-Cover enclosures made to order

Selecting the Right Heater for a Backflow Cover