After years of being on the road, I can assure you that I’ve seen some pretty interesting things pulling back the cover on meter vaults. While Safe-T-Cover is helping to move backflow devices and meters above ground, there are still more than a few notable stories shared between customers and myself about some of the shocking, even scary things we’ve found down in the vault.

Here are some of my favorites:

Snakes on a Plane? Try Snakes in the Meter Vault!

With vaults located in the ground, it’s understandable that creepy crawlies may find their way in. The fact that meter vaults often provide warm, damp and dark conditions, this type of atmosphere replicates most snake dens. Cold-blooded reptiles often wind up in meter vaults as a way to maintain their body temperature, making the perfect scenario for a large king snake or even venomous varieties to surprise unsuspecting contractors . In addition to snakes, meter vaults make the perfect home for spiders, bats, centipedes and other animals/insects you don’t want to scare.

What Remains in the Meter Vault

Human remains anywhere is not a joking matter, but unfortunately happens from time to time with meter vaults. Secluded, below-ground meter vaults are rarely checked on a regular basis, often providing a perfect hiding spot for fugitives or those on the run. Because they are rarely checked, accidental drowning or someone getting injured and not being able to call for help are real possibilities. Unfortunately, during my time at Safe-T-Cover, I’ve heard a story or two about finding remains in vaults.

The Homeless and Meter Vaults

Underground meter vaults are often used to take advantage of the earth’s radiant heat, which helps maintain a constant interior temperature. What makes this a good solution for keeping meters and backflows from freezing, also makes for an ideal situation for homeless folks seeking a protected, warm place to sleep. Of course, while providing protection from the elements, meter vaults are dangerous and prone to flooding. Homeless individuals can also unintentionally damage the equipment in meter vaults, causing thousands of dollars in repairs. Trash and other debris can also be left in the vaults, causing extra work for maintenance personnel.

We’ve discussed all the living things that can crawl into meter vaults and cause damage to backflow devices and other equipment. There are also plenty of elements that cause pretty spectacular situations and destruction to equipment underground. Mud can quickly fill meter vaults, encapsulating equipment in solid earth when it dries. I’ve spoken to many contractors over the years who have spent a great deal of time excavating backflows and meters from sand, dirt and other runoff, sometimes by hand! 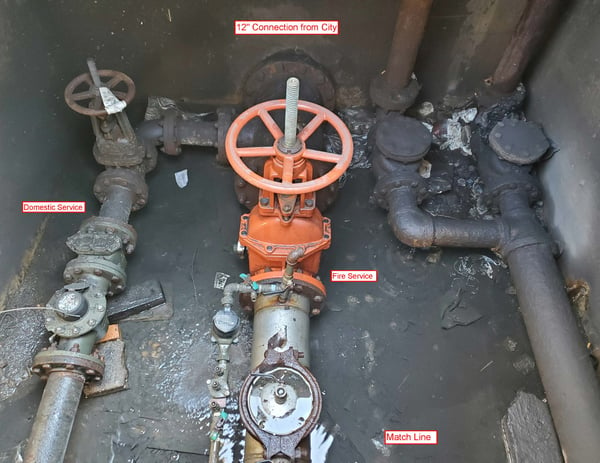 Temperature swings and cold air are also common issues found in vaults. If not properly capped, or left open, cold air can infiltrate enclosed spaces, causing damage to backflow and meter devices. Most equipment in vaults are uninsulated, with the assumption that the warmer ambient temperature below ground will protect it. However, if not properly capped or even left ajar, it can leave equipment as vulnerable as it would be out in the open.

Flooded vaults remain one of the most common situations when dealing with underground meter vaults. Not only can a flooded vault cause equipment damage, it can be the source of serious health and safety risks to those servicing that equipment. Additionally, combined with one of the other “interesting” finds in vaults from above, a flooded vault can take a bad situation and make it potentially deadly.

Avoid dangerous vaults and keep your backflow and meter above ground. Safe-T-Cover can provide you with a custom-designed enclosure that not only provides superior protection, but also makes maintenance a breeze. Check out our “Think Outside the Vault” Campaign to learn more about keeping your backflows and meters out of vaults and above ground.