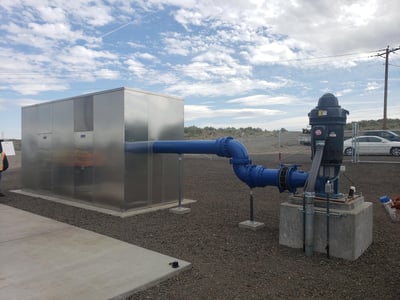 Pumps and their accompanying equipment tend to produce heat, which can be helpful during cold  winter months. What happens to the additional heat that builds up inside a pump enclosure during the summer months?  What effect can it have on equipment and how do you get rid of it?

Heat trapped inside a pump enclosure generated by pump equipment in addition to the outside air temperature during summer months (or in warm climates) can do significant damage to equipment.  Pumps and control panels can overheat rendering them useless, which in turn can affect any process down the line for which they were put in place.  Costs to replace the equipment, the additional costs of labor, and downtime, can make this a very expensive problem. One suggestion would be to add at least one louver or vent to the outside wall on each end of the pump enclosure.  The addition of louvers or vents placed near the top will allow warm air to escape and may also create a draft to pass through the housing and across the pumps to keep them from overheating.  Louvers and vents come in many different sizes that work with most pump enclosures.  They are also easily installed at the factory or on the project site (unlike a pump house, which must be designed ahead of time.)  Louvers and vents can also serve a double purpose in allowing any fumes associated with any pumped fluids to escape as well.

In the case of a larger pump that produces much more heat, we suggest an accompanying louver with an exhaust fan on the opposite end of the enclosure.  The exhaust fan will pull outside air into the enclosure, across the pump equipment, and out the opposite end, allowing heat to escape and keeping the inside of the enclosure at a suitable temperature.  The draft created by the fan inside the pump enclosure will force the louver blades open, allowing air into the enclosure.  When the fan turns off, the draft stopS, and the louver blades will close.  Keep in mind that exhaust fans utilize an electric motor to turn the fan blades, so you will have to consider a power source before installing.

By following these simple steps to remove heat during the summer months, you’ll be able to keep things flowing into the winter.  It will also help extend the lifespan of the equipment, saving you money in the long run.

The Anatomy of a Well Pump Cover

How to Find the Right Weatherproof Pump Enclosure

How Big Should a Pump House Be?

How Do I Hide My Well Pump?

How Do You Cover A Well Pump?

What Is The Best Type Of Access Panel For A Pump Cover?