History of Backflow Cages: How This Product Became So Popular

Although backflow cages have been around for a couple of decades in the irrigation business, the rise of availability and popularity only reaches back a few years. When the housing bubble burst in 2007 and the global economy crashed in 2008, it quickly gave rise to an outbreak of metal theft. Thieves realized that copper pipe and bronze backflow preventers were worth hundreds of dollars at local scrap yards and recycling centers. 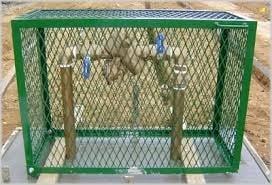 In warm climate areas like Arizona, Nevada and Southern California, backflow preventers are often required to be installed outdoors and above ground. This provided an easy target in ample supply for thieves in search of metal. They became creative and were soon dressing up as municipal workers and stealing backflow preventers in broad daylight, sometimes robbing the same site multiple times. Municipalities, water authorities, and local police departments had a major problem on their hands. As a result, they began installing backflow cages over the valves in order to deter the rash of metal theft. The metal cages seemed strong enough and were lockable so they at least slowed down the metal theft epidemic. As the demand for cages increased, a plethora of small fabrication shops popped up throughout the Southwest and began making the cages in mass quantities. The cages were relatively inexpensive, they were easy to get, and they adequately deterred the theft of the valves they encased. So began the habit of installing backflow preventer cages.

Since 2008, the economy has very slowly improved but the threat of metal theft

still exists. Most municipalities enforce some type of “protective enclosure” to be installed over the backflow preventer to deter theft and vandalism. In the Southwest, the habit of installing backflow preventer cages remains the norm and there are still several manufacturers of cages. However, as the cost of manufacturing has increased over the years, so has the cost of backflow cages. The demand for backflow protection has stayed the same, but the supply has drastically reduced, thereby increasing the cost of these cages in today’s market. Backflow cages used to be more cost effective than aluminum or fiberglass enclosures and the pop up of multiple cage manufacturers supplied the demand and established the habit of using cages. However, domestic manufacturing efficiencies have made ASSE certified enclosures more cost competitive and in many areas are actually cheaper than their see-through cage counterparts. The next time you install a backflow preventer and need to protect it, please call your local supply house and compare the cost of a see-through cage and an ASSE approved enclosure. You will be pleasantly surprised at the quality you can upgrade to at virtually the same price.

WHAT BENEFIT DO CAGES HAVE? 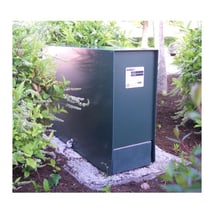 Cages are simply not a good solution for the protection of backflow preventers. Instead, consider an aluminum backflow enclosure. What's inside the aluminum enclosure on the right? Who knows, and there's no temptation or easy way to find out. The only enclosures that truly protect valves from vandals, thieves and Mother Nature are ASSE 1060 approved enclosures.  The approval guarantees the enclosure meets industry standards for freeze protection, structural design, drainage performance, testing and maintenance access and security. With all of those qualifications, you are guaranteed that your backflow preventer will continue to protect your water supply, and that is peace of mind that we all can all rely on.