We get it. But there are several ways to improve the aesthetics, including the option to make the backflow cover smaller. The N pattern backflow preventer can reduce the size by as much as 70%.

THE DESIGN IS COMPACT

The N pattern or “N-type” backflow preventer turns the shutoff valves from the vertical plane into the horizontal plane and places the nineties within the boundaries of the shutoff valves rather than beyond them. The result is a much more compact assembly. And with a smaller assembly, you get a much smaller backflow cover - that's right, up to 70% smaller. Let's take a look at an example.

The first picture is the conventional inline backflow preventer, a design that has been around for decades. This is an 8-inch backflow system. When fitted with OS&Y valve shutoffs (not shown), the backflow enclosure is 12 feet long and 6 feet, 8 inches tall.

This is a big enclosure when compared to the size of an 8-inch N pattern.

The second picture is the N pattern and the backflow cover is just 5 feet, 4 inches square, and 62 inches tall, even with OS&Y valve shut-offs. 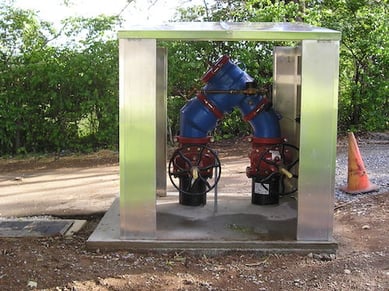 Which solution would you prefer? If the building owner has a choice, there is little doubt which version will be preferred. But these N-types have not caught on as the percentage of total backflow preventers is only 2%-5%.

DOES THE N PATTERN COST MORE?

The N pattern backflow preventer is not on distributor bids because yes, they’re more expensive. Not much more, but more, nonetheless. At the end of the day, when discounts are added and deals are tightened, the N-pattern assembly is 10% more expensive. When a distributor bids on an entire project, they are seeking to win the bid by offering the contractor the best price. Suggesting a more expensive backflow than is absolutely necessary, even if it’s only a few hundred dollars more, is a surefire way to lose the total bid package.

But take a look at the TOTAL COST. The good news for the building owner is that the total package, including the backflow preventer and the backflow cover, is NOT MORE EXPENSIVE. Because these backflow assemblies are more compact, the backflow cover is much smaller and therefore, less expensive: enough to offset the added cost.

Distributors may be aware of this but while the backflow preventer is commonly part of the initial bid package, the backflow cover is usually not. That omission, the lack of a backflow cover in the bid list, hides the evening effect of the total package cost.

So even if you are reluctant to specify an actual model number from a specific manufacturer, always specify N-pattern or N-type as the assembly type because while some are smaller than others, every N-pattern design from all the major manufacturers is smaller than their conventional brethren.

The N-pattern backflow preventers are much smaller than the inline devices — up to 70% smaller. The engineers and contractors that know the benefits and the costs win more jobs.  As you know now, it is actually more cost-effective to specify an N-type backflow in a backflow enclosure because the enclosure will be significantly less expensive.  For more ways to improve the view of the backflow cover, please check out this aesthetics guide (link to aesthetics guide form).  Things such as color, wraps, location, and enclosure size are covered in this easy-to-read guide.