Using metal cages to prevent valve theft came along in 2008 after the economic crash. Thieves found that the metals used in backflow preventers and the surrounding plumbing system were worth a lot of money at the recycling yards.

In Arizona, southern California and Florida, where backflow preventers are installed above ground (good) but completely uncovered and unprotected (bad), valve theft was rampant and cost municipalities and taxpayers millions of dollars in replacement costs.

As a result, lots of small cage manufacturers popped up to supply the immediate demand and knee jerk reaction to using inexpensive cages to temporarily protect their plumbing system. Today, cages are still used in municipal systems to prevent valve theft, but there are many drawbacks to using these “enclosures.”

Earlier this year, a valve thief in Arizona found that an unlocked cage is a gateway to easy money. They stole two backflow preventers from a Phoenix community, leaving several senior citizens, some of whom are disabled, to start 2020 without running water.

“I couldn't take my meds," said El Caro resident Susan Gill. "I couldn't take a shower. I couldn't have coffee, couldn't flush the toilet." The 61-year-old doesn't have bottled water in her apartment unit near 21st and Northern avenues. She relies on what comes out of the tap. "We're elderly people," Gill said. "We can't carry it (bottled water) from the stores or anything. It's too hard for us. Most of us are disabled."

Gill and her neighbors worried they wouldn't get help because the front office was closed and because it was a holiday. She estimated she was without water for about nine hours. 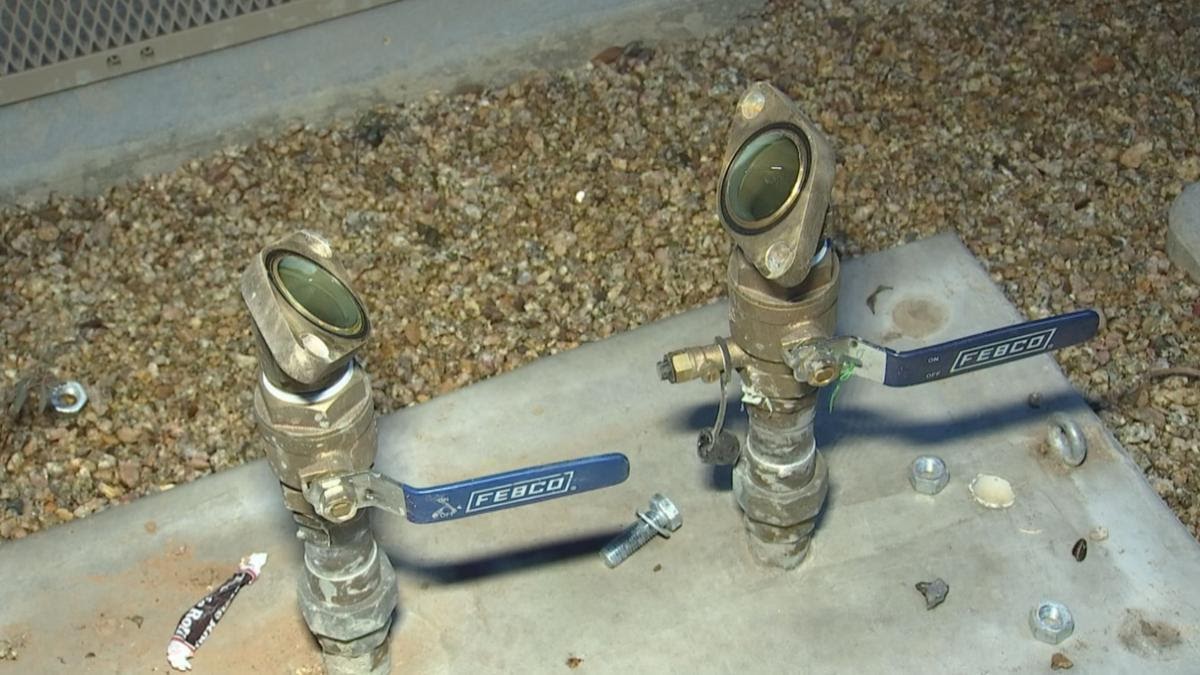 Luckily, Solomon Anderson, a plumber from GMR Plumbing, showed up to help. He did a quick fix and had the water back on by 11:30 a.m. Although the water is flowing now, Anderson will need to come back at a later date to replace the backflow preventers. "It's a big meaty piece of brass with a bunch of bells and whistles on it," he explained. "They (the thieves) shut off the water, took off the bolts, and just took it with them." At least two backflow preventers are missing. The cages that protected the pipes were not locked.

Anderson said he isn't surprised the thieves took brass instead of copper. "I've seen people scrap different types of metal," he said. Brass, you can scrap just as much as copper. Copper is more valuable, but brass is a lot thicker."

As you can see from the picture, the “quick fix” was simply to hard pipe the gap where the backflow preventer was previously installed, creating a very unhealthy cross-connection that puts the entire water system at risk. Until these backflow preventers are replaced, the entire community and the water system as a whole are in a high hazard situation with their water supply.

If these valves were protected by a solid, ASSE 1060-certified enclosure, the thieves would not have even known what was inside, much less been able to steal them.

VIDEO: Safe-T-Cover Hopes To Change The Way You Think About Backflow

Backflow Enclosures and Why You Should Choose an N-Type Device