Use these tips to hide utility boxes

The most common objection we hear about the use of above-ground enclosures for backflow preventers is the aesthetics. We get it. No one wants another big, shiny box distracting customers from the appearance of a new building. But the best location for the backflow device is above ground in an ASSE 1060 enclosure. Backflow devices should not be installed in a vault for risk of a cross-connection when the vault floods and RPZs shouldn't be installed inside the building where they could potentially cause significant flooding. So what do you do? Let's look a a few considerations including colors, landscaping, location and sizing.

Backflow Enclosures Come in Many Colors

This may seem obvious, but few designers realize enclosures are available in many colors. On many commercial projects, we've noticed the electrical transformer is green and it looks much more aesthetically pleasing. Notice the green enclosures in the picture below. They are a much better option than the shiny aluminum. The architect and the building owner will be more in favor of this look. As far as we know, all manufacturers charge more for a color – other than silver – except Safe-T-Cover. We offer three different colors at no extra charge for standard enclosures. The three colors are Hartford green, Sierra tan, and slate grey. For an additional charge, we have a wide variety of other colors available.

Here is a link to the full list of color options available. Many people ask us how the color is applied and are pleasantly surprised. They are not painted and there is no risk of chipping over the life of the enclosure. We work with Pac-Clad®, the largest manufacturer of metal roofs in the United States. They apply a prefinished sheet metal coating of 70% full polyvinylidene fluoride to the aluminum. It was originally developed for use in abrasive environments but is also ideally suited for enclosures. For a custom enclosure, adding color typically adds 15%-20% to the price. 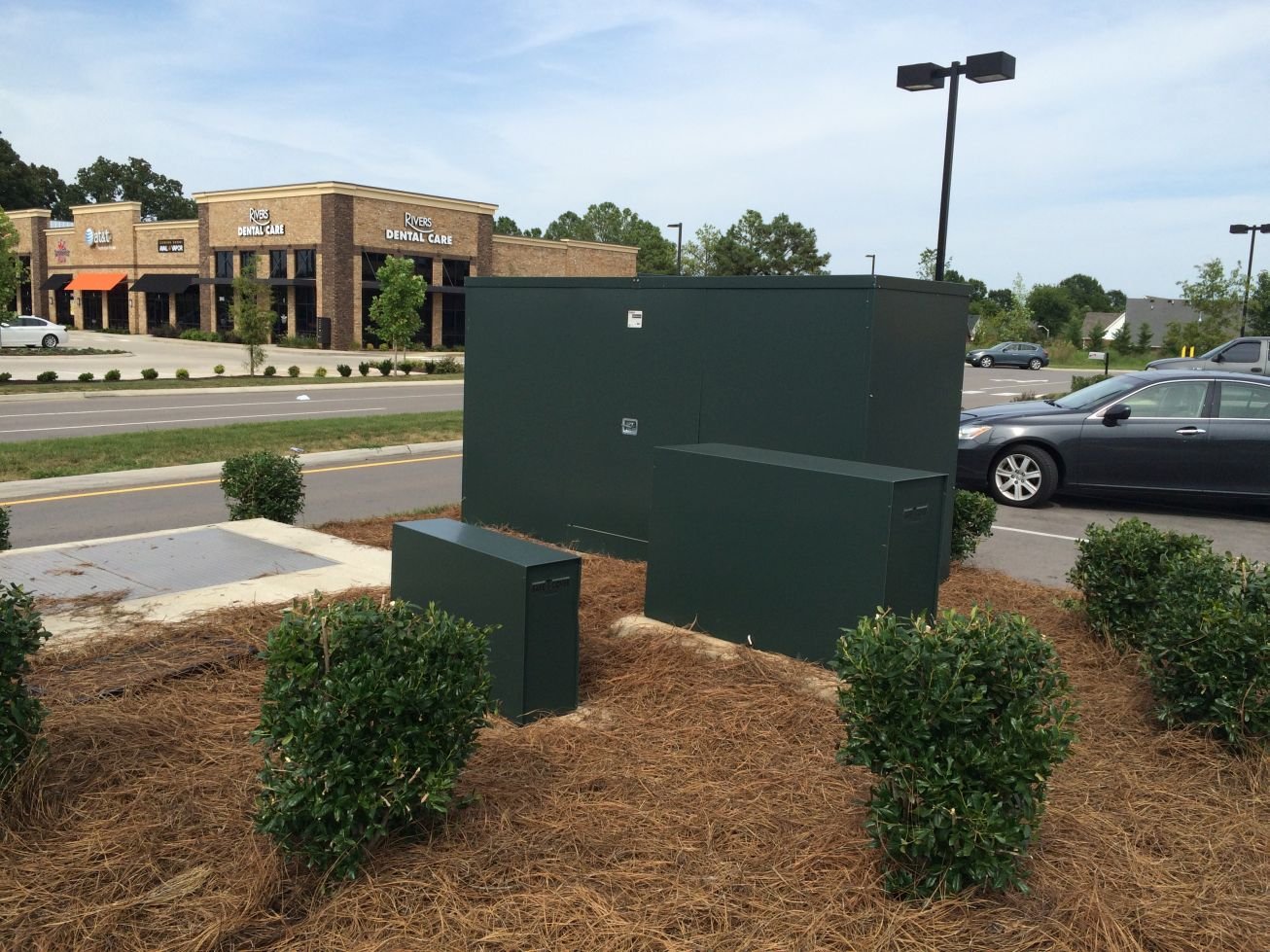 A backflow enclosure in Hartford Green. It looks much more aesthetically pleasing than a shiny aluminum enclosure. 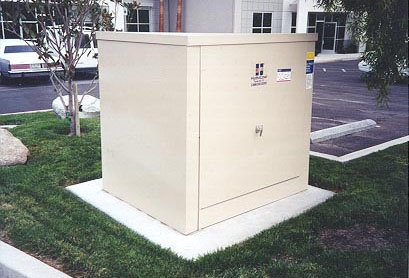 Sierra tan blends in nicely with a desert landscape. 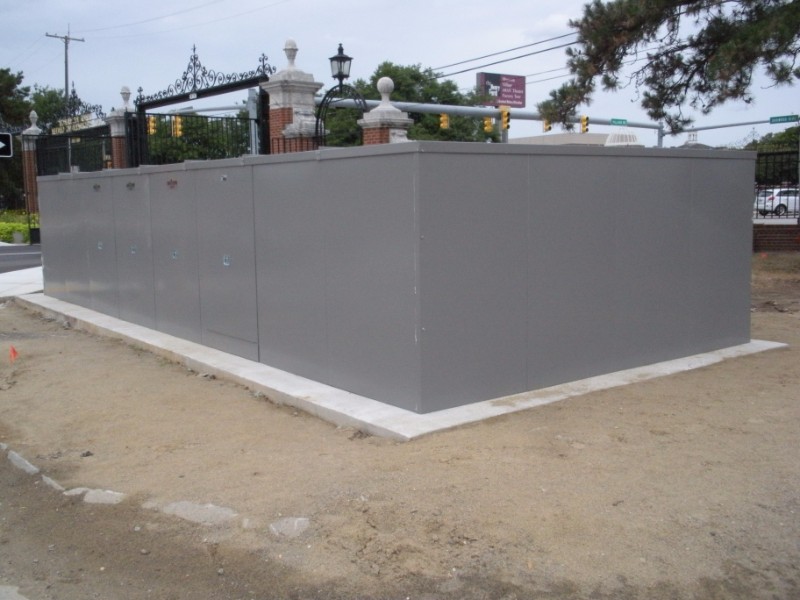 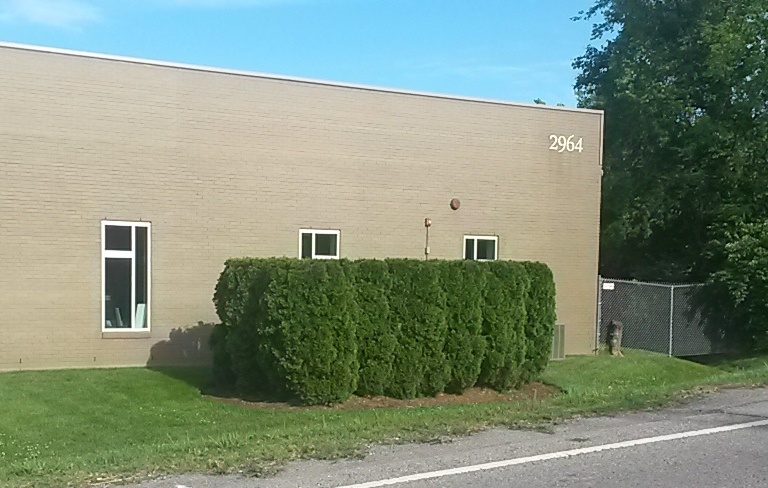 Where is the enclosure in this picture? You guessed it. Behind the thoughtful landscaping. Plus, the engineer took the brief amount of time required to locate the device and enclosure on the side of the building rather than at the front. 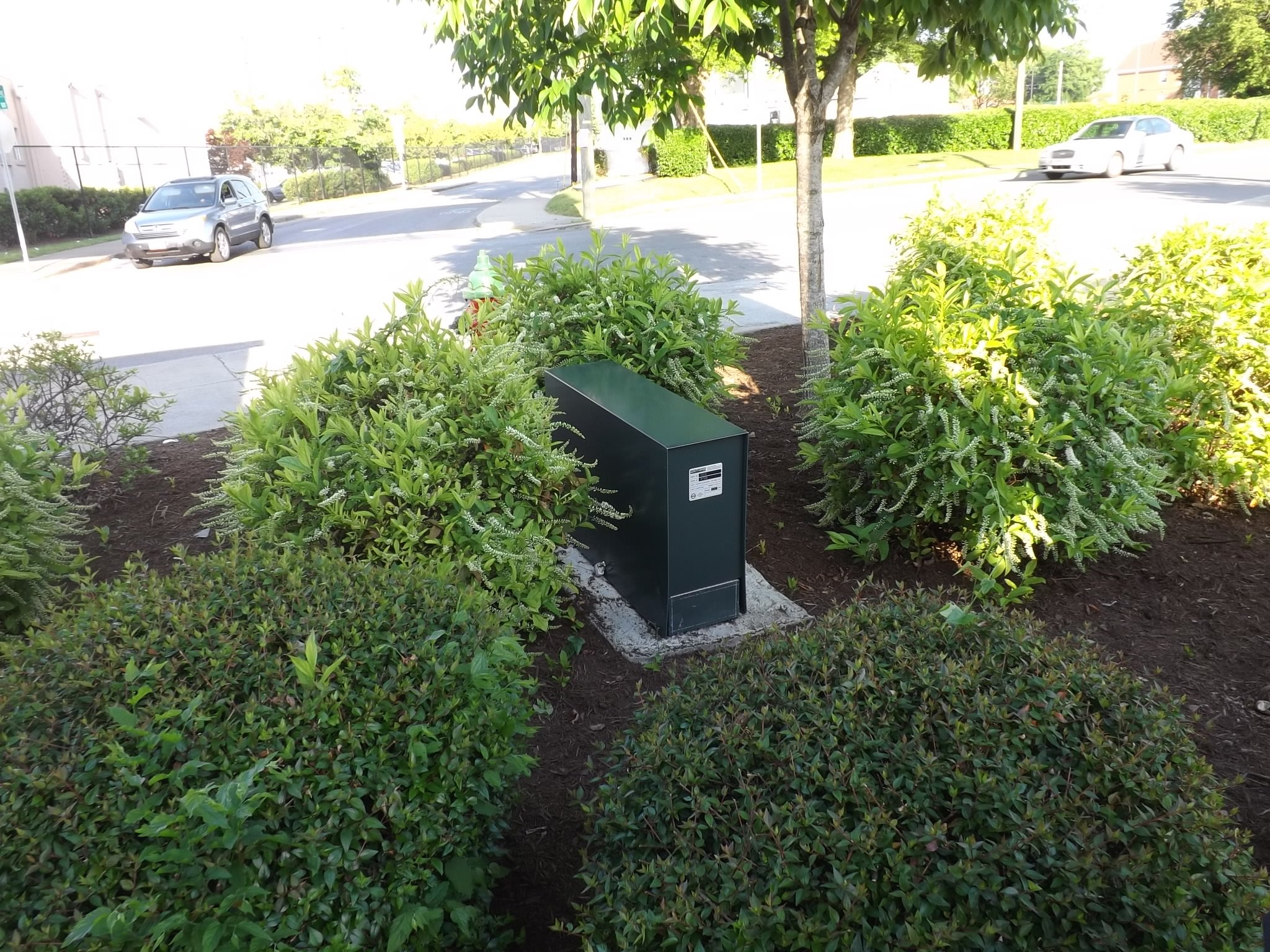 This enclosure is expertly hidden in landscaping of the proper size. The designer also thought to use color to make the enclosure more attractive. Hartford Green is probably our most popular color and can be applied to the enclosure free of charge. 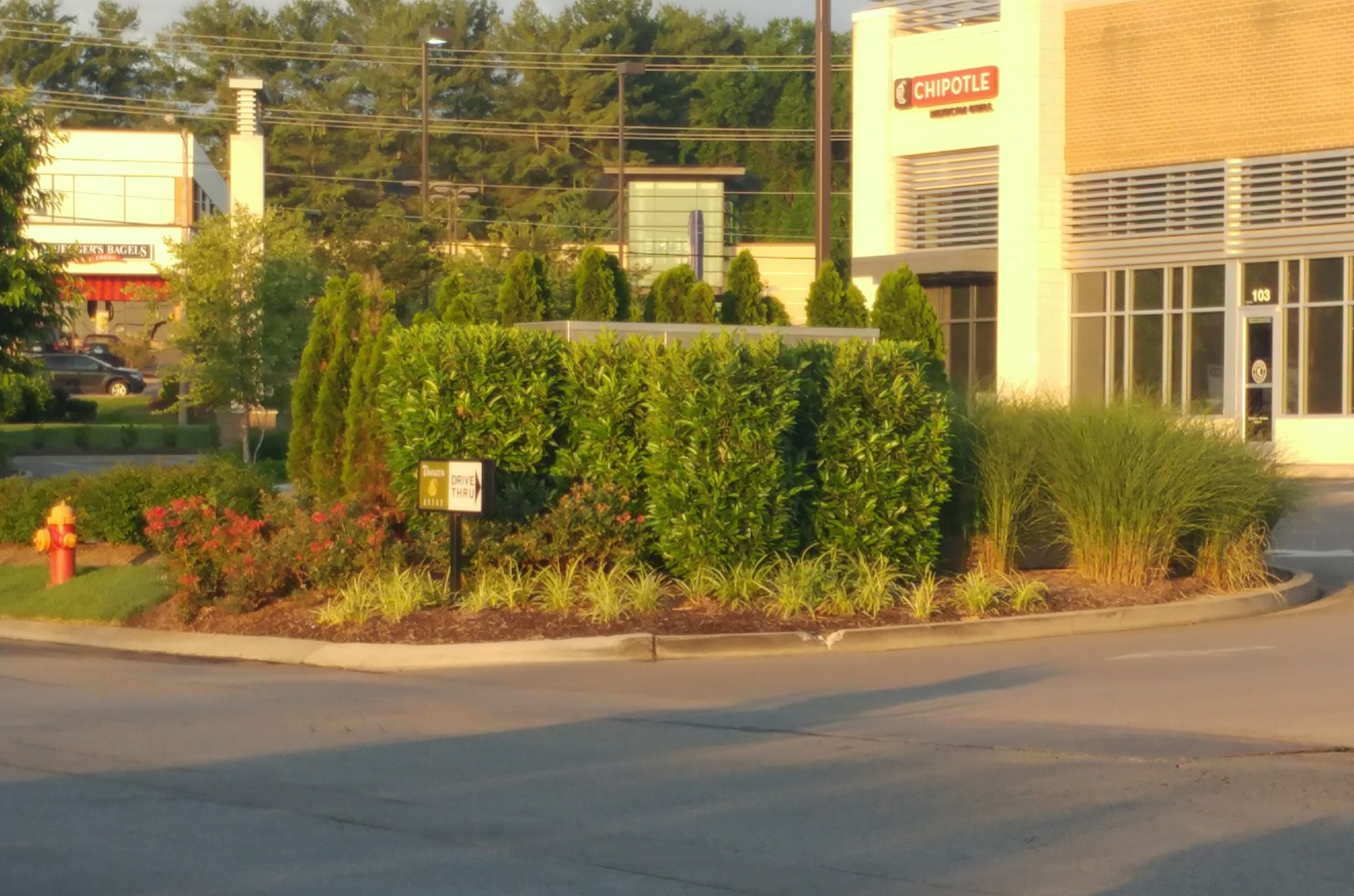 You might be asking the question, “what am I looking at in this picture?” This is a commercial strip center with several tenants. Behind this landscaping is four enclosures. How many can be seen? None, that’s right. Plus the landscaping does not block the line of sight for drivers entering and exiting the parking lot. Hats off to the design team on this project. You too can use landscaping to disguise an enclosure on your next project.

Historically, civil engineers place the water tap for new service as close as possible to the property’s planned driveway location. But with an above-ground backflow preventer enclosure to install, it’s much more sensible to think about the aesthetics and strategically place the water tap accordingly. Several jurisdictions have been using above-ground enclosures long enough that the planning review folks are already thinking about the enclosure’s impact at the beginning.

Seek to place the backflow assembly as close to the property line as you can, but consider the curb appeal. The property line doesn't exist solely at the front entrance or along a roadway. How often do you see the electrical transformer at the main entrance of the building? Or in the middle of the lawn between the building and the road? More often than not, the location of the transformer has been thought about and placed where it is not so easy to notice. Why? Because it is not aesthetically pleasing. Think about the trash dumpster and where those are typically located. It's usually in the back of the building with some type of disguise that keeps them from sticking out and taking away from the appeal of the building. Backflow preventers can be installed behind or beside buildings out of sight, but stay in line with AWWA recommended best practices. Below is an example of excellent placement.

Let's use the same thinking with backflow enclosures as we already do with tranformers and dumpsters. When we see the enclosure placed in plain sight, often at the main entrance, its no wonder the architect and building owner don’t like it. We’ve seen projects where the location of the enclosure was thought about. Those locations are usually away from the main entrance and often along the property line of the building.

The new “N-type” backflow preventer solutions turn the shutoff valves into the vertical plane and place the 90-degree turns within the boundaries of the shutoff valves rather than beyond them. The result is a much more compact assembly. With a smaller assembly, you get a much smaller backflow enclosure. In fact, the covers for these new designs are as much as 70% smaller than their predecessors. If your client has a choice, there is little doubt which version they'll prefer. Here are the two options side by side.

Both of these examples achieve the exact same goal. They are both RPZ backflow preventers protecting the water supply. The package for each - backflow device + enclosure - is about the same price. It's just that one of them is more than 50% smaller. By simply specifying an N-type backflow preventer with an enclosure, you'll please the architect and building owner on your project. These significantly smaller boxes will not only be less of an eyesore from the beginning, but they'll be easier to hide from view with color, landscaping, and a well thought out location.

Both of these examples achieve the exact same goal. They are both RPZ backflow preventers protecting the water supply. The package for each - backflow device + enclosure - is about the same price. It's just that one of them is more than 50% smaller. By simply specifying an N-type backflow preventer with an enclosure, you'll please the architect and building owner on your project. These significantly smaller boxes will not only be less of an eyesore from the beginning, but they'll be easier to hide from view with color, landscaping, and a well thought out location.

Turn Your Backflow Enclosure into a Work of Art

A great way to dress up your backflow enclosure is to wrap it. Your enclosure can be used to display your company logo, advertising, signs, art and more.  The vinyl wrapping materials are made to withstand all types of weather conditions. You can wrap a backflow enclosure in as little as two hours and it will last years.

Your enclosure won't look like a plain aluminum box but instead, contribute to the visual appeal of the building and surrounding area. This is the most creative way to hide utility boxes. The only thing that limits you is your imagination.

Some wraps can contain very detailed imagery like this 3D image.

Your wrap can highlight something noteworthy about your city. Like a famous singer or sports star.

You may even use your enclosure wrap as a sign, so it’s easier for people to find your building.

A wrap can be used to display your company logo, artwork, or advertising. The possibilities are endless.

A wrap can be used to show off organization pride or history on campus or in the surrounding community.

A wrap can be used to show off organization pride or history on campus or in the surrounding community.

Some wraps can contain very detailed imagery like this one that creates the appearance of a bookshelf.