Thermal Enclosures and the Big Freeze 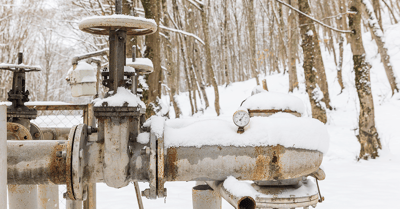 In February 2021, three massive winter storms hit the state of Texas, causing the worst infrastructure failure in state history. Millions of people were affected by the loss of power, while residents endured water and food shortages for weeks. The main culprit of these failures was the lack of proper thermal enclosures for much of the state’s utility infrastructure.

While the devastation caused millions in damages and even cost some Texans their lives, Texas communities and legislators banded together to initiate important regulations to prevent this kind of crisis from happening again. 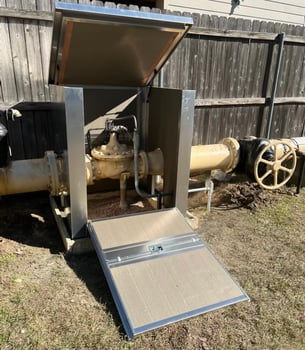 Shortly after the crisis caused by the “Big Freeze”, investigators confirmed that a majority of the failures were caused by insufficiently-protected water and electricity systems affected by the extreme cold. Thermal protection, similar to solutions offered by Safe-T-Cover, would have helped to prevent many of the failures that happened during those three tragic weeks.

Perhaps the most significant piece in the legislation, according to KHOU, is that “[f]acilities must upgrade equipment to include adequate heat tracing on pipes, insulation of critical components and thermal enclosures and windbreaks around sensitive equipment.” The bill establishes robust winterization standards that had never been required before, actually providing government agencies the ability to enforce these rules, while allowing those who don’t meet state standards a “reasonable amount of time to cure deficiencies.”

Safe-T-Cover uses marine-grade aluminum with a locking mechanism to provide protection from thieves, vandals and accidents.R-9 polyisocyanurate insulation in the enclosure's walls and doors, and R18 protection in the roof provide frost protection. However, adding a slab-mounted heater offers ultimate protection. A slab-mounted backflow cover 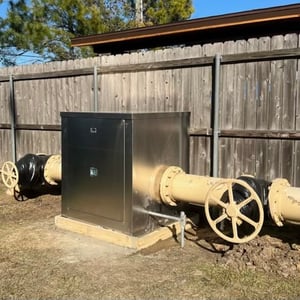 heater provides heat to both the internal equipment as well as 16 inches into the riser pipes beneath the slab. These heaters will maintain an interior temperature of 40° with an outside temperature of as low as  –30° as is needed to conform to ASSE 1060 requirements.

The cost to add a heater to the enclosure is no real consideration at all compared to the financial losses suffered during the “Big Freeze”: our most expensive heating option costs no more than a few hundred dollars.

Need a custom enclosure for an automatic control valve, air compressor, Grundfos pump or water storage tank? We've got that covered. In fact, we work on enclosures for all kinds of applications, and it's likely we have experience with your equipment's needs. The engineers at Safe-T-Cover enjoy working on custom-designed projects and are happy to include a variety of options from cutouts to climate control. Just follow our equipment enclosure checklist and you'll be on your way to the best enclosure for your needs that only takes a few weeks from sign-off to delivery.

The Importance of a Backflow Enclosure Heating Element

What is the Most Critical Part of an Insulated Backflow Enclosure?

How to Maintain ASSE 1060 Approved Backflow Enclosures for Winter

Cages are for the Birds: Backflow Enclosures Outperform Backflow Cages

Does Your Manufacturer Use ASSE 1060 Class 1 Approved Heaters?